I can honestly say that I too was aware of environmental issues from an early age. I read Rachel Carson’s Silent Spring when I was ten. By high school, in the early 70s, I was attending sit-ins for free speech at Hollywood High School, supporting the teachers’ strike, and sneaking off to various peace demonstrations and Earth Day celebrations.

I can look at these young climate strikers and say, “when I was your age, I was out in the streets too. We’ve got your backs.” But I feel a heart-clenching sorrow that nearly 50 years later, we’re not leaving the next generations—of humans or non-human animals— the beautifully biodiverse, thriving, cooperative, healed world that we envisioned.

The world that these very serious teens and children are facing now is in an existential crisis due to anthropogenic (human-caused) climate disruption that dwarfs in anxiety all but the closest calls to nuclear destruction of the Cold War. Our choice now is literally “change or die,” not only for humans and our so-called civilization, but for all species.

The struggles 50 years ago were important. Some of them, for a while, we thought we had won. The Vietnam War ended, and many thought women and people of color were making progress towards equality. I naively thought we were moving towards a world where diversity of every kind would be valued and sought out, where decisions and policies would be based on justice tempered by compassion and wisdom.

And all the while, Exxon, the Koch brothers, and other corporate entities were cynically hiding the truth, the facts, the evidence, and the speed with which the tsunami of climate disruption would overtake our island of hope. Even the now ubiquitous term “climate change” was secretly pushed into the media as a more bland and less frightening alternative to “global warming.”

I started grousing some time ago that “change” was far too benign a term for the direness of our situation. I started calling it “climate breakdown,” which I have seen used here and there in the media. Journalist Dahr Jamail, author of the new book The End of Ice, prefers the term anthropogenic climate disruption, which more accurately describes the extreme weather, the breakdown of the jet stream, and exponential change to climatic systems that we are already experiencing.

I talk to some of the young people. Two private schools, Santa Fe Prep and Desert Academy, are on spring break and there are good-size contingents—girls and boys, young men and young women—from both schools. There’s also a group from Monte de Sol charter high school in Santa Fe, who explain to me that they’re there on their own, without any teachers. I thank them for being here. Later I read that Santa Fe Public Schools has, unhelpfully, sent out a letter to students and parents informing them that their absence today would be considered unexcused.

Which is ironic considering that Mayor Alan Webber, is here, as is City Councilwoman Renee Villarreal. Both of them speak briefly, respectfully and wisely leaving the leadership to organizer Hannah Laga Abram and the young speakers at the Plaza and later at the Roundhouse, our state legislature.

It’s a chilly late winter day, but I’m sure all these kids know—better than lots of adults I’ve been trying to reach—that just because it’s cold doesn’t mean there’s no global warming or climate disruption. In fact, a destructive “bomb cyclone” storm has just roared across the mid-section of the country. New Mexico received welcome and merciful snow and rain—some respite from the past year’s extreme drought—as well as scary high winds. Meanwhile, a cyclone is hitting Mozambique and Zimbabwe, and in other shocking and upsetting news, a white nationalist terrorist, “inspired” by the current US president, has just murdered 49 worshippers at two mosques in New Zealand.

It feels familiar to be marching from the Plaza, our historic town center, to the Roundhouse, as I have so many times in the 25 years I’ve lived in Santa Fe—against the war in Iraq, for freedom in Tibet, for climate action, the Women’s March, the March for Science. I wonder if—and hope—the world as we know it will last long enough for these children to grow up, even to become my age, and still passionately exercise their democratic rights. I wish even more that they will be able to stroll these streets peacefully in a transformed society—a thriving City Different powered by solar energy, wind turbines, and presently unimaginable renewables, completely freed from the tyranny of fossil fuels and corporate domination.

We crowd into the rotunda. The kids sit on the terrazzo floor, intuitively forming a circle facing inwards. Hannah says a circle is great but the speakers are going to be at the podium, so let’s all face that way. I sit on the floor with the kids, grateful that my yoga practice keeps me flexible. It’s familiar to me, sitting on a floor with young people. For a moment I flashback to my first sit-in at Hollywood High, for free speech in support of our striking teachers. I, the straight-A honor student, was willing to risk detention for what I believed was right.

I haven’t grown out of my democratic socialism. I’m happy to hear some of the young speakers calling out capitalism as the cause of the destruction we are witnessing. I’m glad to see a sign that says, “System Change, not Climate Change.”

The presentation begins with an honoring of the indigenous people of this area. Marian Naranjo, a potter and activist from Santa Clara Pueblo, softly tells the story of how this land was given by Creator to the guardianship of the Tewa people.

The climate strikers, even kids as young as nine or ten, speak with a confidence I wouldn’t have had at their age. Student council elections in junior high in the late 60’s weren’t about real issues—certainly not the planetary emergency life and death issues these children are facing. I’m shocked that a 9-year-old can talk about the changes she’s already seen—less rain and snow and hotter summers than even a few years ago in her younger childhood. That’s how fast things are changing.

I’m not surprised to hear articulate teenagers, as my friends and I were pretty involved and outspoken at that age. It’s the third and fourth graders from the somewhat ironically named Global Warming Express who really impress me. A girl named Lori ends her speech with, “The Earth might not have a voice, but we are its voice.” Another girl, Emilie, says, “climate change can’t be ignored because it’s an emergency…for animals who are losing their habitat and becoming extinct,” as well as for people.

As a writer for the online conservation magazine Voices for Biodiversity, I am moved to hear frequent references to the other lives—the non-human lives—that will be lost if we can’t at least mitigate climate breakdown. A few speakers, youth, children, and adults, reference the Sixth Extinction. It’s a comfort that the concerns for the effects of climate breakdown go beyond a human-centric view to love and compassion for all suffering species.

Emilie ends by saying, “Our legislators need to remember that they represent us, not the oil and gas companies that are destroying our lives.” A girl after my own heart.

Marian Naranjo ends the proceedings with a chant in Tewa, as we all open our hearts to reverence for Mother Earth.

As I look into the eyes of the kids around me, I see myself at their age, and at my age. I see a mirror of passion for the Earth. These are not the kids who need to read Weather Menders, though some might enjoy it. They are already way, way awake—to both the direness of our collective plight, and to hopeful, focused action.

I heard author and activisit Dahr Jamail speak eloquently a few days ago. He was often in tears, as was I, and I suspect many in the audience. According to the facts of science, we are already beyond a number of tipping points. Most of the glaciers are going to melt, even in my expected lifespan. The Arctic, a region that he and I share a love of, is warming at least twice as fast as the rest of the planet. The stories that he recounts, beginning the same year that I started traveling frequently to Alaska, are the observations I have made myself. Though I’m not a climber like he is, I have noticed and wondered, “Didn’t I walk from the parking lot at Matanuska Glacier right on to the glacier back in 1996 or 1997?” and “Wasn’t Portage Glacier a short walk from the parking lot along the Seward Highway? And wasn’t Mendenhall Glacier closer and larger back then?”

In your high school-aged son’s or granddaughter’s lifetime, the glaciers have melted that much and that quickly. I’m glad I’ve been privileged to see them and witness their awesome power and the transcendent beauty of the unique aqua of ancient ice. 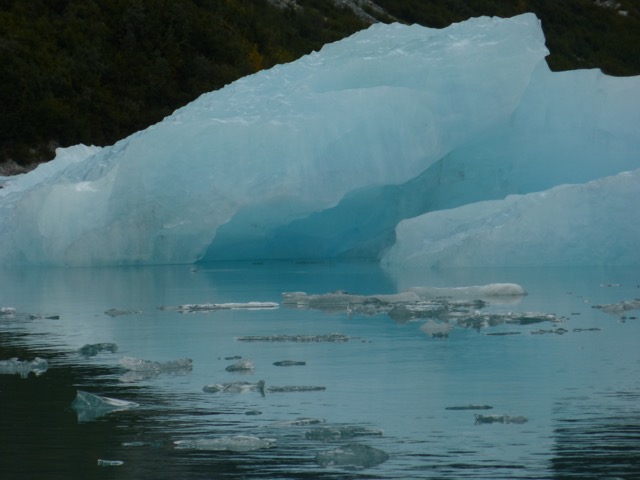 Dahr Jamail writes and speaks of living “hope-free,” which I suppose creates a kind of freedom. But I can’t go there. Not yet. I’m clinging to the idea of the seemingly impossible “moonshot” solutions. To the hope and belief that these brilliant young climate strikers—perhaps souls who have come as Bodhisattvas to make altruistic sacrifices, and perhaps with karmic destinies of healing—will come up with some amazingly creative, outrageous, courageous solutions born of quantum leaps, non-linear transrational thinking, and intuition.

Admittedly, Weather Menders relies on a deus ex machina, the “god from a machine” of drama. But I maintain, as I wrote a year ago, that consciousness is the wild card that can still change everything.

I will not live without hope. As my friend, Jungian psychotherapist and author Rebecca Peterson says, “It’s an informed hope, not a denial. It’s an interesting position, this acceptance without fatalism.”

Three will meet three,
and a portal will be.
The portal will lead
to wherever there’s need,
to stop the greed,
so all will be freed.